I believe we tend to over complicate things.  In an effort to be diplomatic, we tend to refuse to admit ready answers to known problems, instead insisting that the problems are so complex as to result in only suboptimal gray-area patchwork micro remedies.

Education in the U.S. is a prime example.

It’s obvious that our kids are falling behind kids in the rest of the world.  The Program for International Student Assessment (PISA), coordinated by the Organization for Economic Cooperation and Development (OECD), has measured the performance of 15-year-old students in mathematics, science, and reading literacy every 3 years since 2000. In 2012, PISA was administered in 65 countries and education systems, including all 34 member countries of the OECD.  PISA 2012 results are reported by average scale score (from 0 to 1,000) as well as by the percentage of students reaching particular proficiency levels.

Readers may know that I took a three year leave from my primary finance career in 2013 to teach.  I wanted to see the system for myself and help a few kids along the way.  I chose a very difficult route.  I received my teaching certificates as a middle school science and math teacher, joined Americorps (the Corporation for National and Community Service), and served as a middle school math teacher at public schools in two very poor areas of Pennsylvania and New Jersey.  I then wanted to see the education system in action outside the urban public setting and taught middle school math at a private school in an upscale town in New Jersey.

I’ve seen the failure of our education system first hand. And, I’ve heard all the hand wringing excuses. The parents are not involved, the districts lack money, the teachers union makes it impossible to fire bad teachers, middle school kids can’t read and do basic arithmetic so there’s no way I can teach them algebra, the kids’ home environment is so poor that they can’t possibly do their homework etc, etc, etc.

Here’s a singular solution to fixing our education system.

Make the school administrators claw back 1% of their annual pay to the school district for every chapter that a teacher fails to teach in their curriculum in any year.

Teachers should teach a full year’s curriculum at grade level.  Seems obvious, but teachers generally do not do this.  In an effort to leave no child behind and silence critics, teachers are slowing down the pace for all.  So, no child left behind has resulted in all children falling behind. Teachers must keep the pace and administrators must let them.  The real problem, as I see it, is the administrators who discourage teachers from teaching a full year’s curriculum at grade level.  All teachers submit weekly lesson plans.  How about the administrators are forced to claw back 1% of their annual pay for every chapter missed?  Administrators are not rich; 1% would prove quite the incentive to focus everyone on keeping the pace.

I followed my own teaching advice in every setting where I was a teacher.  The pace was faster than the kids ever experienced, but the far majority of the kids found a way to rise to the challenge.  I chose to help the most number of kids possible.

I’m a believer that state localities are in the best position to set scholastic standards they believe in.  I hope, for the kids’ sake in those states, that those setting the standards set high enough standards for their kids to compete.  But, it should be the localities choice.  If a family doesn’t like what their locality does, than get involved in politics and change the system or throw out the office holders or move.  So, I’m not a believer in common core on a national basis.  I am though a believer in school choice, so that everyone can take advantage of the move option noted above.  Competition is good. 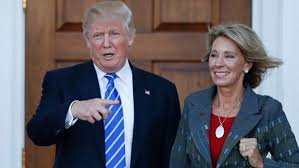 I’m encouraged by President-elect Trump’s choice for Secretary of Education – Betsy DeVos.  My hope and expectation is that she and the Trump administration will set an environment which encourages new entrepreneurial solutions, both public and private, to our sorry education system and will streamline regulations so that these solutions can work. We could be on the verge of new real solutions – technology and politics may be converging at just the right time.  As is the case with most things, I suspect real innovation will come from outside the current system – and most likely from the private sector.

Soon, we will learn if soon-to-be President Trump and the Republican Congress follow through on their vow to quickly... read more