Soon, we will learn if soon-to-be President Trump and the Republican Congress follow through on their vow to quickly repeal and replace Obamacare (the Affordable Care Act or ACA).  I admit to a bias here.  I simply do not see how bureaucrats in Washington, D.C. could ever manage our nation’s healthcare insurance infrastructure as well or better compared to a competitive marketplace.  So, for the nation’s benefit, please Repeal and Replace.  But, replace with what?  That’s the rub.  Politics won’t allow a return to a system that was.  My hope is less government interference, but we’ll see.

One common theme amongst those advocating repeal and replace, and a frequent call by candidate Trump is encouraging insurers to sell health insurance across state lines. That is, insurers licensed to sell insurance in any particular state would be allowed to sell insurance under that state’s rules in other states. The intention is to spur more competition, which theoretically could increase consumer choice, lower premiums, and improve services. For instance, an insurer could choose to follow the rules of a state with fairly unrestrictive benefit requirements in order to offer lower-cost coverage in another state. Although states currently have the ability to permit the sale of insurance across state lines, few have done so to date and no out-of-state insurers have entered the market in those states.

As indicated in the U.S. map, insurance premiums vary considerably by state.  Should Repeal and Replace encourage the sale of healthcare 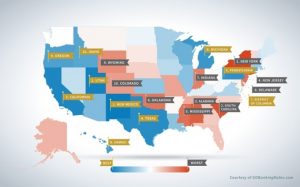 My guess is that Repeal and Replace will include an encouragement for insurance companies to sell across state lines – and that’s to the benefit of the red states.

We have one mission at InFocus Capital Partners – help our clients optimize their relationships with their current and... read more