We have one mission at InFocus Capital Partners – help our clients optimize their relationships with their current and potential stakeholders. We do this by leveraging our experience, capabilities, credibility, and tools to serve as a trusted finance strategy advisor on retained engagements to high quality public and private companies of significance. Please contact me directly to initiate a potential retained client discussion. 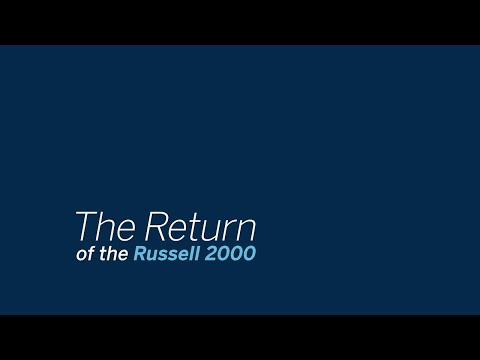 e might about President Trump’s personality (I prefer humbler softer spoken people, but that’s me), but his economic policies in my view are generally good for the U.S. economy and for all Americans.  Lower tax rates (driven down by President Trump’s December 2017 signing of the Tax Cuts and Jobs Act) and less regulation (mostly via Executive Order) will, I believe, improve U.S. economic growth.

But investors know this, right?  After all, the major stock indexes are at record highs and the President keeps reminding us of that lest we ever forget.

Why, then, has the Russell 2000 over the past 5 years and of late lagged the S&P 500?  My guess is stifling regulations during the previous administration disproportionately hurt smaller companies and that, more recently, lower GDP growth in the U.S. compared to many other countries favors larger internationally oriented companies compared to smaller domestically oriented companies.

I do expect a reversion to the mean where the Russell 2000 outperforms the S&P 500 over time.  In 2017, smaller domestic public companies paid a higher corporate tax rate than their larger international brethren. Now lower tax rates for all and lesser regulations should stimulate the domestic economy, disproportionately aiding smaller cap companies.

But, when will the Russell 2000 again outperform the S&P 500?  The last major tax overhaul might shed some light on timing.

In August 1981, President Reagan signed into law Economic Recovery Tax Act of 1981 which lowered tax rates.  But, GDP growth did not accelerate until 1983, and that was after the recession of 1982. This is an imperfect analogue to today and in fact many economic historians doubt whether lower tax rates had any impact on economic growth, but for lack of a better analogue, we’ll assume U.S. economic growth improves beginning 2019.  From a stock perspective, over the 18 months post August 1981, the S&P 500 rose by 33%, compared to an increase in the Vanguard Small Cap index of 60%.  We use this Vanguard index for performance in the early 1980’s since the Russell index initiated in 1984.

History does not necessarily repeat, but it might and I personally own ETFs tracking the performance of both the S&P 500 and the Russell 2000.

Want to get in front of 250,000+ high quality investors and corporations? InFocus Capital Partners can help.

Of WACC, ROIC, AND HEALTHCARE