InFocus Capital Partners, LLC is well positioned to help high quality private and public companies Be Understood, Be Seen, and Stay in Focus.  We believe visibility aids institutional investor and corporate relationships, valuations, liquidity, corporate development, new hire activity, and employee morale.  If your company, private or public, would benefit from increased recognition amongst high quality institutional investors and corporations contact us – we can help.

As we gear up for President Trump’s anticipated tweet to usher in our activist President’s jawboning down of drug prices, it’s helpful to remember that many of us have seen a few U.S. healthcare funding revolutions before.  But most money managers really haven’t since their median age is about 37 years old.  In fact, as we will see below, an important healthcare funding revolution occurred in 1983, about the time the median age money manager was teething, rather than tweeting.

As we shall see in this blog, healthcare funding revolutions have occurred before and they have resulted in nice times to invest in healthcare equities broadly.

The 1983 event was President Reagan’s signature on the Social Security Amendments of 1983 (April 20, 1983) which ushered in Diagnosis Related Group (DRG) funding for inpatient hospital services.  DRG’s altered inpatient hospital service services payments, by what is now called the Centers of Medicare and Medicaid Services (CMS), to a defined fixed payment (the DRG) from a pay for service methodology.  DRG’s were implemented and exist today.

Then, on August 31, 1993, President Clinton presented the Health Security Act to Congress, better known as Hillarycare.  Hillarycare was to usher in a single payer system and met with fierce resistance until then Majority Leader George Mitchell pronounced it dead on September 26, 1994. 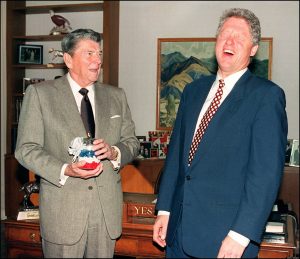 How healthcare stocks will perform after President Trump begins his healthcare tweet (let’s call that Trumpcare) is anyone’s guess, but FSPHX has already underperformed the S&P 500 by 2700bp since mid 2016.  We would not be surprised to see healthcare stocks broadly up significantly one year from now and especially one year post tweet. Keep in mind that past is not necessarily prologue and we offer no buy or sell recommendations on any equities.

Soon, we will learn if soon-to-be President Trump and the Republican Congress follow through on their vow to quickly... read more

Want to get in front of 250,000+ high quality investors and corporations? InFocus Capital Partners can help.